One more day to have the girls..saddens my heart.. I have enjoyed them so much and their parents should be so proud of these two.. They have manners, happy spirits, love of God in their hearts, they are in tune of being thoughtful to each other and to others and know how to think of others besides themselves. Their parents should get a huge pat on the back for a job well done~!~!~!. I'm going to miss them so much.. I love their kick backs to Dave when he tries to tease them. They are very 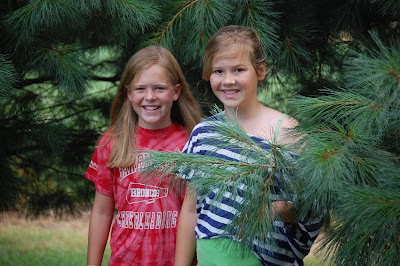 witty. Yesterday we went to church and during the sermon the girls were getting restless, so I always carry crayons and paper in my bible case for kids to use that are around me. Parents are so thankful.. I gave them to Liz and Emily and they got busy drawing pictures and making signs "Love you GranAnnie and Grandpa Dave".. When we got home Dave mentioned that they missed the sermon.. They both told him what the sermon was all about and they were right on the mark.. I smiled..:) He told them how could you know that much when you were not listening. I told G-Dave that women are multi- taskers... I was proud of them...
After church we came home and I quickly got ribs in the oven. Big storm was coming our way and the electricity always goes off.. I made cherry pie popovers while it was cooking.. Got them in the oven baking while we had dinner.. Emily said "what kind of meat is this, this is really good"... all week she has been telling me she doesn't like pork.. I told her it was pig.. "PIG?" she looked surprised and said m-m- pig is pretty good.. I told her well you have been eating pork couple times this week.. she looked at me and said "Really?".. I said yes, you have been eating bacon, your favorite...she thought bacon came from a cow.. So we had a lesson on what kind of meat is pork and beef.. We had a good time talking and laughing. Dave just shook his head. 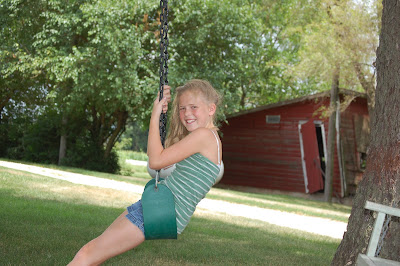 These girls could be beauty queens.. They are so beautiful~! They had a good time swinging on Ben's swing. 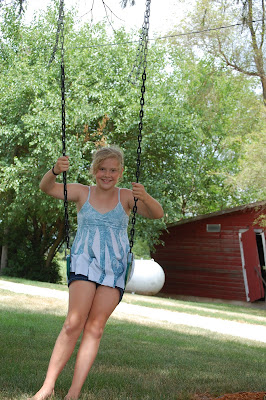 Here's Emily getting ready to take off..on the swing. They both had a great time. I don't think there is anything that they don't enjoy doing. well, maybe washing dishes because GranAnnie doesn't have a dishwasher.. They asked me why don't you have a dishwasher.. I told them I had four.. two on my hands and two on Grandpa Dave's hands.. They said I still needed a dishwasher.. I really don't want one..have never had one and I think it's just quicker to wash and dry them and put the dishes away.
Yesterday afternoon I took them to Aunt Tracie's house. They have the camera and Tracie said they are taking lots of pictures.. They stayed all night at Tracie's house and I called them this morning. They were just getting up at 10... Tracie said they watched a movie, ate snacks, did some crafts, had a facial skin care with masks, cleansers, lotions. They gave the dog a bath because he smelled.. Rocco smelled like a skunk..I have this product called Technu that is for poison ivy but it's great for dogs to get the smell from a skunk off. Technu takes the oil from the skunk spray off their fur.. IT actually works. Rocco smelled a lot better.. He loves the girls because they give him so much attention. He is going to miss them just like me.. I'm going to go and pick up Ben at 2 today and then we are going to Holly's house to go swimming.. Tracie has class tonight at the massage school and Emily, Liz and I will be taking care of Ben. Last night for the girls and tomorrow I'll be taking them back to Stockton , Illinois to meet Rich so he can take them back to Barrington, Illinois. Today I'm going to take all the pictures I have taken of their visit here and get them all put on a CD so they can take them home to show their families.They want to go visit their kitties that can't go home with them one more time. Tigger and Sonny.. They were a little sad when their parents told them the kitties could not come home, but it was O.K. they understood.
Guess I best get busy here, get things in order and get ready for the day...
Have a Blessed Tiggeriffic Day~! ta ta for now from Iowa:)

Glad you guys are having a great time. Hats off to Aunt Tracie for the sleep over.... I'm sure they had a lot of fun.

What beautiful girls inside and out!