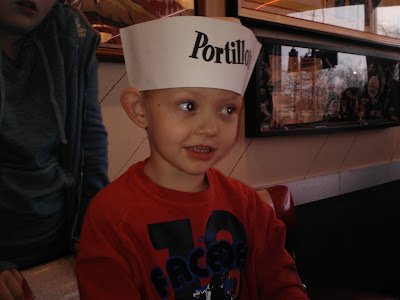 I just love this picture.. It was taken in Chicago while we were there visiting son Rich and his family.  Ben loves Hot Dogs and this was just the right place to take him.. They give out hats and of course he likes hats.. He looks so cute with this hat on his head..   We were here Dec. 3rd. Ben loves Uncle Richie and had a really good time with him while we were there visiting for the week-end..
He really liked playing the WII skate board game with John, his cousin. John is 14 and was surprised that Ben could do so good in playing this game.  Ben is very good with Wii games. 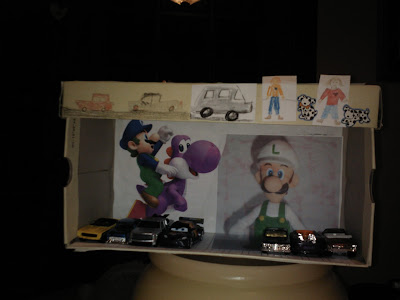 Last Saturday, Ben came to my house and we spent 3 hours making a garage for his cars..  All sides of this shoe box is decorated with Mario and Luigi  pictures.. I drew pictures of cars on the lid and the people are GranAnnie and his other Grandmother,, JoGram..
He had a great time cutting pictures out and I pasted them onto the box.   He also colored some of these pictures. Overall it was a great time to cut, paste, color and be creative and spend time together making something.  Today he took the lid to school to show his teacher. She was really proud of him and told him he could show the class his lid to the class at snack time.
Have been busy knitting hats for family.  Christmas is coming quickly and now I wish I would of gotten  the bug to make these sooner.. Oh well, it will get done and all well be O.K.
Getting ready to have total knee surgery on my right knee now.  Surgery date is Dec. 27th.. Getting house ready to come home to .. It's so different than the first two I had ~ one in 2001 and then 2004 they were on my left knee.  Last time they kept me in the hospital for 5 days AND after the Knee Replacement Class  I went to on Monday they now keep you in the hospital for 2 days. My surgery will be on a Tues and I'll be coming home on Thurs.. They said they will be getting me up 1 hour after surgery.. The nurse said that they have found that one will recover quicker by getting you up quickly... O.K. I'm ready ~ have a hard time with walking but know I will have a better life after I recover..
Watching the Republican Debates this evening on TV. It's in Sioux City, Iowa tonight. Very interesting.
Have a blessed day and ta ta for now from Iowa:)
Posted by Tiggeriffic at 9:16 PM 5 comments