A Great Day at Play Station ~! 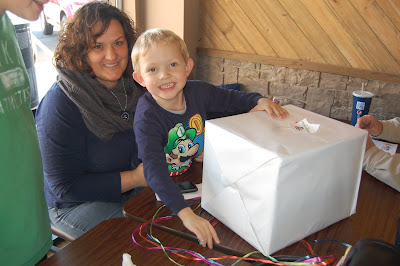 Today is Ben's Birthday, he is 5 years old and he was so excited. He is with his Dad this week-end so we celebrated yesterday (11-11-11-)  We went to the Hubba Hubba Hot Dog restaurant.  It was so good.. I should of taken a picture of my hot dog, it was piled high with relish, banana peppers,  pickles, lettuce, tomato.  It was a large dog so it was a big sandwich.  Ben had a hot dog with lots of ketchup.. Just like Uncle Richie, he likes ketchup on everything.
My friend Holly and her children, Nathan and Caryn were there along with Tracie's good friend Kim and her son who is 5 years old , Jacob.. to help celebrate Ben's birthday early. 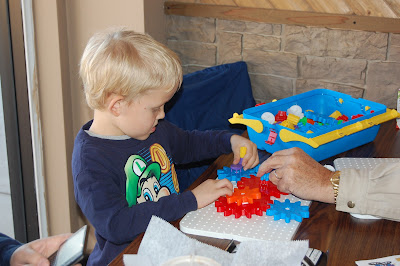 This is what was in the big box.. Tracie got it at the children's toy store that is in Marion, Iowa. Intelligent Life Toys. He was so excited when he saw what it really was. so did Pa Pa Dee Dee, he helped Ben make something , see his hand right in there helping Ben?.  I thought ~ there's a lot of pieces... But it is very hands on and very educational. I'm sure it's good for motor skills.. It kept Ben and Pa Pa Dee very busy for sometime.. 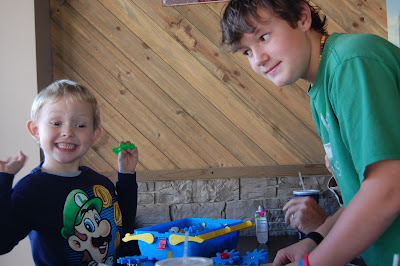 This is Nathan, he is turning 13 today. Ben was born on the same day as Nathan's.. Nov . 12th.   Ben and Nathan are good friends and he loves going to Holly's house... 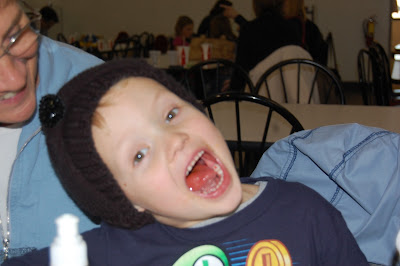 Here we are at the Play Station. I'm knitting a hat and Ben tried it on and just loved it.. Now he wants me to make him one.. I told him I would.. I just love this picture of him.. He had just eaten his cupcake that Tracie had bought for the party.  You can see all the frosting stuck on his teeth. He had a great time at Play Station with Jacob.. Ben loved all the little children there and made friends with them and was very gentle around them.  Ben is good with small children and loves to coddle them and talk with them and look after them so they don't get hurt. 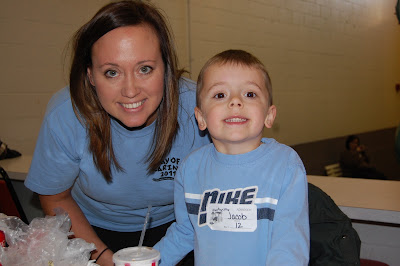 Here is a picture of Kim and Jacob.. Ben and Jacob had such a great time together..   I loves Kim's eyes, they are so pretty.  She is a wonderful girl and is such a good Mom..
Yesterday was Veterans Day ~ at the HyVee Grocery Store in Marion  . Holly and I dropped off Nathan because his boy scout troop was gong to serve breakfast to all the veterans.. HyVee fixed it and the boys served it to them.. Nathan said there were over 700 men and women they served..  While we were there I shook hands with as many of the veterans that I could ~ Thanked them and told them how brave I thought they were ~ and without them we as Americans would not be free.. Some of the men had tears and were so thankful.. I love to see veterans wherever I go so I can thank them and shake their hands.   We as Americans should do this daily~!   One man told me he fought in World War 1 and he flew a plane with the fighting tigers.. If you get a chance google fighting tigers  and see the awesome airplane he flew.  He told me his story and was crying while telling it, because his best buddy was hit and his plane went down. He said he knows he died..  All these men have such great stories to tell and we need to take time to listen and then give them a big Thank You~!
Have a great and tiggeriffic day~!  ta ta for now from Iowa:)
Posted by Tiggeriffic at 9:03 AM

Awww, happy birthday big guy! I like ketchup on lots of things too!

Happy Birthday Bennie!!! It sure looks like you had a fun day. Love you and Miss you.

Looks like Ben had a great birthday bash -- love the hat! :)

I hope he had a super wonderful day! I love that they served the Veteran's!